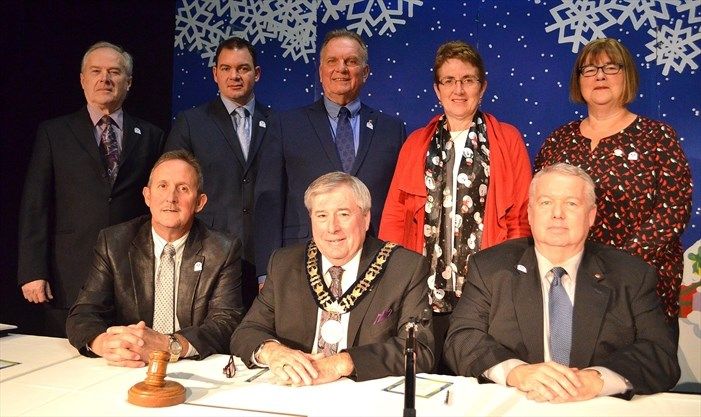 HARRISTON — The Town of Minto officially swore in its seventh sitting council since amalgamation at the Harriston Town Hall Theatre on Dec. 4.

Led by Mayor George Bridge, who was elected to his third straight term on Oct. 22, the incoming council features a mix of returning, former and new members. Deputy Mayor Dave Turton won the only acclaimed seat on council, and will be joined by councillors Jean Anderson, Judy Dirksen, Ron B. Elliott, Mark MacKenzie and Geoff Gunson.

“The decisions they make are not always easy,” said MC Annilene McRobb, Town of Minto deputy clerk. “They look not only to the present-day needs, but to the needs of Minto in the future.”

Chief administrative officer Bill White, who announced his retirement in September, also addressed the crowd on hand before council was sworn in. White has been involved in public service for 35 years and will be leaving his municipal position on Dec. 14.

“Tonight, a newly-formed administration begins a four-year journey, with a new council to carry on a legacy of building this wonderful community,” he said. “In 2019, Minto celebrates 20 years of amalgamation — something to be proud of. An example of how amalgamation can work. Four communities come together as one, to govern as a single unit, yet keep their own identity.”

Anderson, Dirksen and Elliott were all re-elected as councillors for the coming term. MacKenzie is a former councillor, deputy mayor and Wellington County councillor. Gunson will be the lone rookie council member.

“We have great things happening in Minto, and we need to build on them,” said Gunson. “We also have some big decisions to make along the way. I embrace this opportunity to help build the future.”

“‘Where your family belongs’ is our motto, and I think we bring that home. It’s people like yourselves out there that make that happen.”

by Dan McNee
Dan McNee is a sports reporter/photographer with The Listowel Banner and The Minto Express.
Follow the Express on Twitter and the Banner on Facebook.
Email: dmcnee@northperth.com