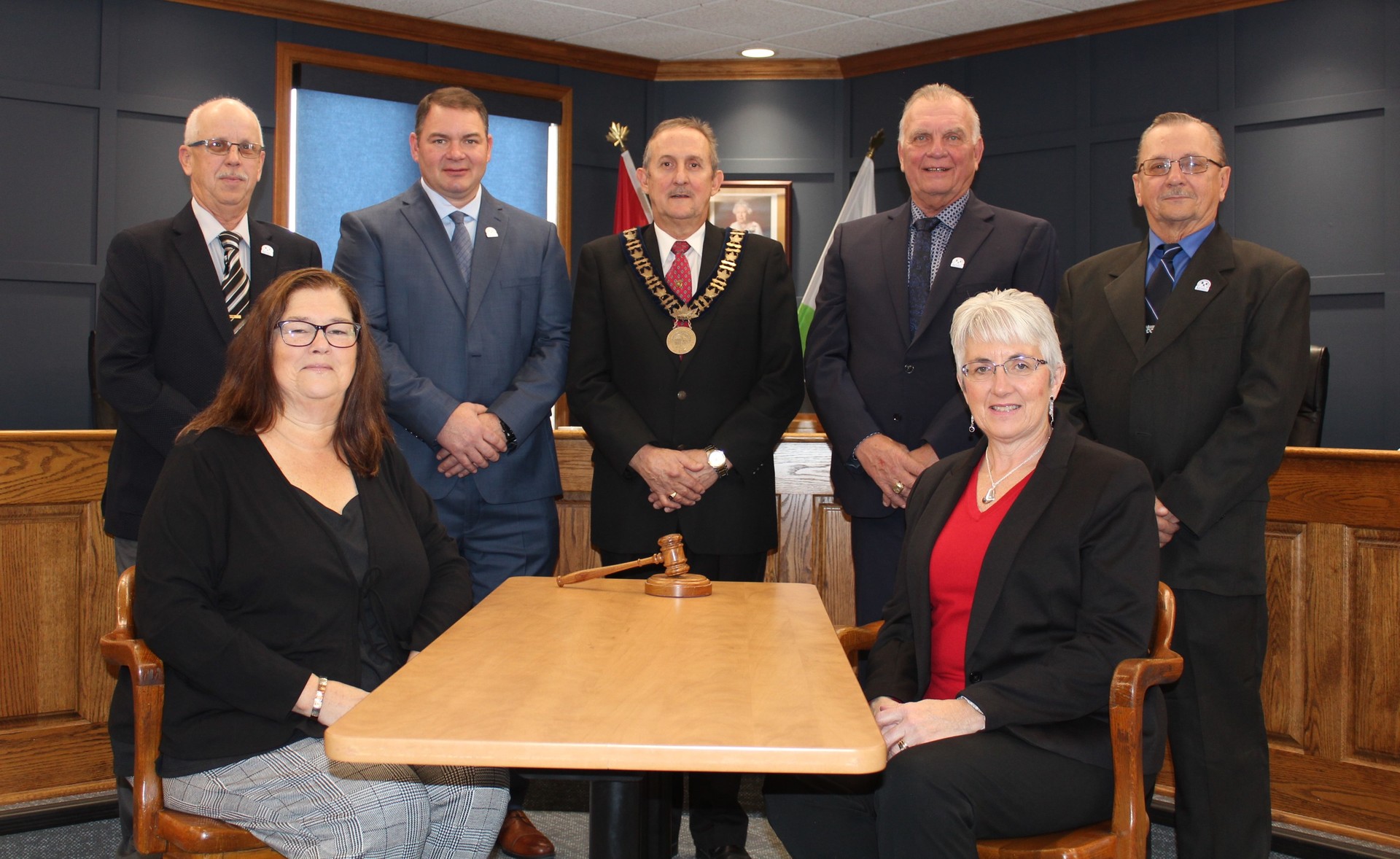 Dave Turton is entering this term as Mayor of the Town of Minto.  He just finished a 4-year term as Deputy Mayor and before that served four terms as councillor.  He has lived in Minto his entire life and was raised at RR#1 Palmerston as the second youngest in a family of ten children.  Dave and his wife Pam are very proud parents of three children, Brooks (Jackie), Jessica (Tim), and Paige (Shawn).  They love to spend time with their kids and wonderful six fun-filled grandchildren.   Pam and Dave just celebrated 44 years of marriage.

Mayor Turton recently celebrated his 34th year at Darling Ingredients as Manager of Capital Projects and Engineering, with dual tickets in the trades of Power Engineering and Millwrighting. Presently, Dave is an Elder/Trustee with the Harriston United Church, a member of the Harriston Masonic Lodge, Harriston Legion, K-40 Club, and Harriston Curling Club.  He is a Past member of the North Wellington Hospital Board, Minto Clifford school council, Harriston Kinsmen Club, Palmerston Marlins and Minto minor hockey and ball.  He has given blood over 70 times to the Canadian Blood Services.

He looks forward to continuing to represent the people of Minto throughout his next term as Mayor.

Deputy Mayor Anderson has been a resident of Minto for over 35 years, she and her husband David have raised their four sons in Minto, they currently enjoy country life on a small hobby farm just outside of Palmerston.

Jean's Career in Healthcare has covered a broad spectrum, including acute care in local hospitals, long term care including owning and operating her own Home for the Aged, a management position for 10 years in our local hospitals and currently in Dialysis at the Palmerston hospital and Emergency Nursing at Groves Memorial Hospital in Fergus. She has been off work for the past three years as she battled cancer successfully, and a subsequent accident breaking her leg in two places, she is currently striving to return to her work as a Registered Nurse. Jean earned her post RN BScN in 2006, and currently holds the CNA certification in both Nephrology nursing and Emergency nursing. Jean is currently entering her first term as Deputy Mayor and is the President of the Horticultural Society, her time off work has allowed her the time to become much more involved in the community, volunteering at the Norgan Theatre, she and David host a Community Christmas Dinner on Christmas Day providing home cooked meal and time of fellowship for members of the community.

Jean has thoroughly enjoyed her work on council , and is looking forward to continuing to serve the community in her role as your Deputy Mayor as well as an active community resident .

Judy and her husband Dick owned and operated their family farm between Harriston and Teviotdale for over 35 years.  In 2015, their son and daughter-in-law joined the business where they continue to focus on cattle, crops and custom work services.

They are the proud parents of three adult children, two daughters-in-law and 7 grandchildren.  All but their daughter Lisa live right here in Minto as do Judy’s parents.

Along with being a member of Council in Minto, Judy is an appointed member of the Agriculture Food and Rural Affairs Appeals Tribunal (AFRAAT) and the Normal Farm Practices Protection Board (NFPPB). She is an elected board member for the Veal Farmers of Ontario and the Canlead Solutions Board.  The Dirksen Family attends the Palmerston Evangelical Missionary Church where Judy is currently Chair of the Board.

Minto is a great place to live, work and play and Judy looks forward to working together with Council, Minto Staff and Minto Residents, making Minto even better, together.

Councillor Ron Elliott is a former Mayor of the Town of Minto, Mayor of Palmerston and Palmerston Councillor having over 20 years experience in municipal politics.

A former Governor and now active member of the Lion's Club, Ron has worked tirelessly on the Palmerston Lions Park, the CNRA Building and other community needs. Formerly employed by the Midwestern Regional Centre, Ron and his wife Elaine have resided in Palmerston for over 50 years and have two daughters Sherry and Rhonda, who both reside in Palmerston with Ron’s four amazing grandchildren: Jocelyn, Kaylee, Blair and Brookelyn. Volunteering and participating within the community has always been a passion of Ron’s, and so he serves on the Norgan Theatre Board and Parks and Recreation Advisory Committee. Having spent most of his life as a player, coach, official and executive member in hockey, softball and other local sports, Ron continues to umpire with Softball Ontario. Over the past many years, Ron has had the honour of being a part of multiple Town of Minto councils that have seen many successes, and he looks forward to being a part of this new, strong council that will help to shape the future of our community.

Councillor Gunson has lived and worked in Minto for the past fifteen years with his wife Sarah and their two beautiful children, Rayven (age 11) and Ryder (age 9). He is a local businessman with Eric Cox Sanitation, as a Sales and Service Technician. Entering his second term on Council, Geoff has taken the opportunity to invest his time into learning and volunteering on several committees.

Currently, Geoff is Co-President of Minto Minor Hockey, and a member of the Harriston Legion Branch 296. Geoff has spent most of his life involved in local sports, in particular hockey and softball for which he has held the position of player, coach and official, most recently coaching his son in hockey for the Minto Mad Dogs. He is also a volunteer firefighter with Minto Fire. He feels that it is important to give back to the community in which he and his family reside in any way he can.

Councillor Gunson is excited to be in his second term on Council and is looking forward to continuing to help build a Minto that his children will want to call home. He stands for open mindedness, transparency, and accountability, and is confident that he can relate to a demographic that will shape an exciting future for Minto. He is a very hardworking, energetic and dedicated individual that enjoys a challenge, and he looks forward to this opportunity to serve his community.

Raised in the Shelburne area, Councillor Ed Podniewicz moved with his family to Palmerston in 1986 and has been married to his lovely wife Rosa for over 46 years. Together they raised twin sons and a daughter and now enjoy their 2 wonderful grandchildren. Upon moving to Palmerston Ed owned and operated a successful takeout restaurant and a contracting business before starting his career as a building inspector with the Town of Minto. After working for Minto for three years Ed took a position with the Municipality of North Perth as Chief Building Official. Ed recently retired from North Perth and is currently employed part time as the Chief Building Official for the Township of Howick.

Councillor Podniewicz is a long-term member of the Palmerston Lions Club and has been involved in numerous volunteer projects over the years. He is especially proud of his contributions to in the creation of the Palmerston Lions Heritage Park, a shining beacon for the community as well as a popular tourist attraction. Ed’s extensive Municipal experience will be a great asset in his new role for the Town of Minto as Councillor. He is proud to serve and assist in making Minto a place where your family belongs.

Born and raised in Minto, Councillor Paul Zimmerman will be entering his first term as a member of Council. Paul and his wife Edna have two children, Shawn who live in Harriston and Melissa and her husband Christopher in Elmira. Paul and Edna spend quite a bit of their time on the weekends spoiling their two grandsons, Jase and Rory.

Paul has spent his entire working career in the residential construction industry with over twenty five years working for two different modular home companies and eight years as Construction Manager. Currently Paul is self-employed, running his own painting and home repair business. Paul is a dedicated member of the Minto Fire Department, volunteering for almost 45 years. Currently he is serving as Fire Captain for the Harriston Station.

Paul looks forward to working with the new Council and being a voice for the people of Minto.

David Anderson has been a lifelong resident of Minto, currently residing on a small hobby farm near Palmerston with his wife Jean. They have raised their family of four boys in Minto and one of their eight grandchildren currently resides in Minto.

He has been involved in local politics for twenty years; twelve as a Councillor within Minto, four years as the Mayor, and four years as the County Councillor. He was a Director on the North Wellington Health Care Board for eight years and he volunteers as a Team Captain at the Norgan Theatre in Palmerston. He manages and operates The Service Ontario office in Harriston, assisting people with Licensing issues and Health Cards in this region for over thirty years. He is passionate about his family, his farm friends, golf, and the community he lives in.  Combining these passions with his love of politics, David is looking forward to representing the citizens of Minto at Wellington County Council for the next four years.